If I were to die today and walk through the pearly gates of heaven and to the big registration desk where St. Peter’s tells you who goes up and who goes down, I believe that those of us who have been given Heaven’s secret access code will also have the glorious choice on how to live our life eternally. And if I had my choice on where to spend my life eternal, I’d choose to be at Federico’s Supper Club. Why?

When you walk into the dimly lit swank interior, it takes one back into the days when men were dapper and debonair in their pin striped suits and women demurely provocative in beehive dos and flounced dresses. This is the type of place that you’d expected the ghosts of the infamous Rat Pack (Dean Martin, Frank Old Blue Eyes Sinatra, Sammy Davis Jr., Joey Bishop and Peter Lawford) to frequently haunt as it ekes of old world charm and hospitality, hailing from an era where classy establishments were the norm and not the exception.

We were greeted at the front by a very charming and ooh so very sleek piece of eye candy, Joe Borean, Sommelier and Maitre D extraordinaire who poured out the charm in very eloquent measures, knowing full well that more than a little bit of flattery does go more than a little way in the hospitality industry.

The meal was a leisurely event during which there was a live guitarist who played classical and some flamenco guitar. Because we had won tickets to the dinner and comedy show, we chose our 3 course dinner from the Supper Club menu (3 courses and show for only $50/person). I chose Gamberoni Satimbocca (which had big plump juicy prawns), Osso Buco (which fell off the fork with just the slightest touch and every bite was just bursting with flavor) and Torta di Cioccolato (flourless Callebaut chocolate banana cake that was so lusciously chocolate and served with vanilla ice cream that I could have had this for all three courses).

Jill choose Squash soup (robust with flavors), Branzino alla Griglia (grilled Mediterranean sea bass served with an unusual but rather tasty orange and black salsa) and the creme caramel (a delightful light dessert in contrast to the denser chocolate cake).

Left:  ERICA SIGURDSON (Canadian Comedy Award Nominee: Best Female Standup) was the MC of the show and was very educational, teaching the women on the benefits of hanky spankies!  Right: MARK DRAJIAN, CTV Weatherman, didn’t know whether to cry or laugh as he struts his stuff on Kitsalano beach, sucking in more spare tires than a Canadian Tire store has in their repair shop. 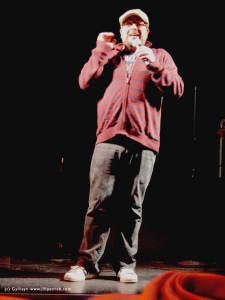 DARCY MICHAEL (Comedy Now) comes out of the closet in Ladner but decides it’s much safer indoors with his best friend, MJ. Right: ROMAN DANYLO (CTV Star of Comedy Inc!) plans to pass a bill outlawing seat belts on airplanes as he considers them ugly airplane accessories.

A bellyful of scrumptious food and a bellyful of laughter – can you think of a better way to spend a Friday evening?  No, although “BRAVISSIMO” I think is the one and only appropriate word to describe what I thought was the ultimate Italian class act evening at FEDERICO’S SUPPER CLUB. 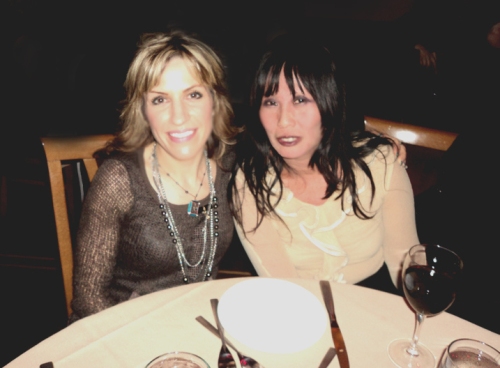 Me and talented artist friend:  Jill Patrick: (www.jillpatrick.com / @GylliaynArt) who by the way, took all of the photos except for the top and bottom one).